BUSINESS ON THE FRONTLINES

Could a 9-foot fish and a poisonous root hold answers for helping the people of the Amazon? A team of MBA students traveled to the rainforest to find out. 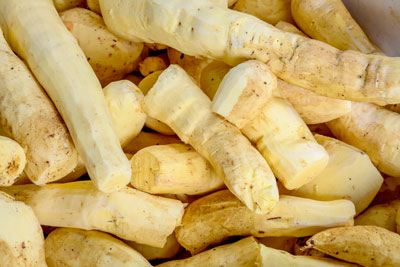 Deep in the heart of the Amazon rainforest — reached by a flight into the jungle, a two-hour boat trip, a pickup truck transporting 31 people in the bed despite a downpour, and a half-hour walk — five Notre Dame MBA students and two faculty advisers are learning how to turn mandioca root into a crunchy starch product called farinha.

An indigenous farmer shows the outsiders how they squeeze out the water used to soften and detoxify the poisonous root with an ingenious woven device called a tipiti — picture a 6-foot-long Chinese finger cuff with loops on both ends. They stuff the wet root flour inside, then hook the loops through logs, which are pulled apart by a simple lever system of ladder rungs on the other end of the logs to stretch the tipiti. Yellow water squeezes out of the bottom as they ratchet the logs in opposite directions.

Then the dried flour clumps are pushed through a woven sieve and toasted on a large firepit frying pan to create the small yellow granules of farinha that are sprinkled onto other food or eaten as a starchy side across the region. Mandioca, or cassava, one of the oldest crops in the world, has been prepared like this for generations.

“We’re here to learn about the process, not to change it but to look at ways to increase their income,” said Nathalia Bauerfeldt (MBA ’19), a Brazilian who had never been to the region. “Think about the scope of the Amazon and generations of people needing food. They found a source that was poisonous, but they transformed it into something that is high in calories and carbs. Looking them in the eye and learning about their lives has changed my perspective completely.”

She found the experience emotional at times because people from the big Brazilian cities like her native Sâo Paulo sometimes look down on the isolated Amazonians. These kinds of profound transformations are one reason why Viva Bartkus, an associate professor in the Mendoza College of Business, started the Notre Dame MBA course Business on the Frontlines (BOTFL).

Indigenous communities are the last line of defense for the Amazon rainforest, sometimes called the lungs of the planet. The Amazon River is larger by volume than the next seven largest rivers in the world combined. The rainforest inhabitants thwart outside incursions by loggers, miners and ranchers, and their economic stability keeps them from resorting to slash-and-burn farming, poaching endangered species or selling out.

Last year, another group of students went to the Amazon and recommended changes in the supply chain for even more remote fishing communities that depend on the pirarucu lurking in the Amazon Basin’s rivers and lakes. This air-breathing dinosaur of a fish can grow to 10 feet long and weigh 400 pounds. 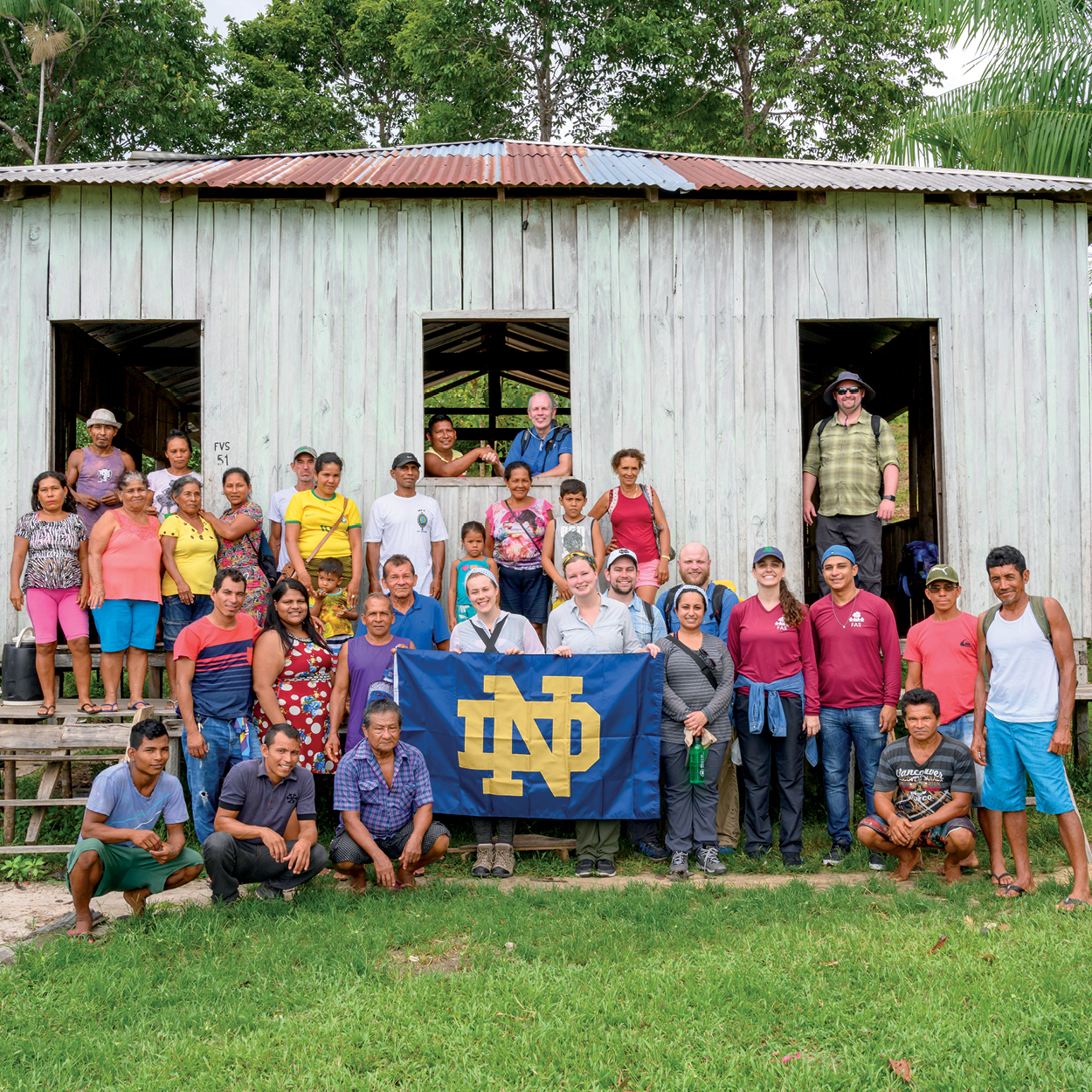 That group learned how these “keepers of the forest” harpoon a portion of the rebounding pirarucu population when the waters recede enough to hunt the fish in shallow lakes. The annual catch could be an economic boon for the communities, but the profits were largely going to middlemen and processors who transport and distribute the prized food in the big city of Manaus. So the students suggested the communities buy their own cold-storage boats for the five-day trip down the river.

What’s remarkable about the Notre Dame project is that their research did not turn into a stack of papers resting on a shelf. Instead, the project partner, the Sustainable Amazonas Foundation (FAS), helped the communities sidestep a cartel that controlled the transport of goods and set the prices. They collectively bought eight boats capable of transporting a perishable good on ice hundreds of miles downriver.

If this year’s group can engineer similar results with farinha, fishing and farming could finally become the communities’ primary source of cash income.

The semester-long BOTFL course examines the impact of business in societies suffering from deep poverty or conflict. MBA students, alumni advisers and faculty from Mendoza travel around the world to work in the field with humanitarian organizations like FAS.

Since Bartkus started the program in 2008, nearly 50 teams have gone to more than 25 countries. They have worked on a wide range of projects, including agriculture, infrastructure, mining, post-war reconciliation, health, human trafficking and child prostitution. They study a problem presented by the partner organization and make suggestions for business development.

As Bartkus reminds her students, “Never underestimate the inherent dignity in a good day’s work.”

Entering its second decade, the program has advanced enough to use its own alumni as advisers on many of the projects. Mendoza plans to expand the program next year from 30 to 50 students, which means attracting more corporate and foundation sponsors to pay for these trips to troubled areas. Future expansion aims to double the number of students again.

Two years ago, a Brazilian BOTFL student went to Bolivia and thought the program could help in the Amazon. His father, Benjamin Sicsú, who chaired the board of FAS, and the FAS director, Virgilio Viana, agreed that the Notre Dame team might offer a different perspective and decided to launch a collaborative effort. 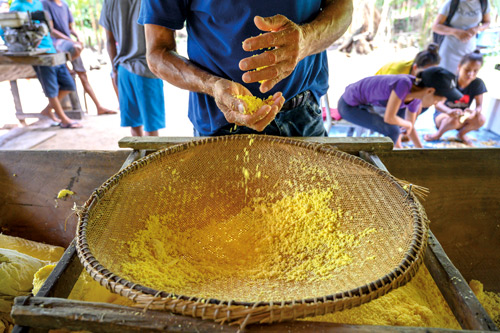 An expert in forestry and sustainable development, Viana advised Pope Francis on his environmental encyclical Laudato Sí. He helped found FAS in 2007 as a partnership between the government of the state of Amazonas and Bradesco Bank, and the nonprofit organization has since gained the support of large corporations including Coca-Cola and Samsung.

The mission of FAS is to promote sustainable development, environmental conservation and improvement in the quality of life of the river communities in the state of Amazonas. FAS is charged with implementing the Bolsa Floresta program, which provides direct financial assistance and support to communities in protected areas in exchange for their conservation measures. Many families depend on the Bolsa payment to buy goods they are not able to produce. 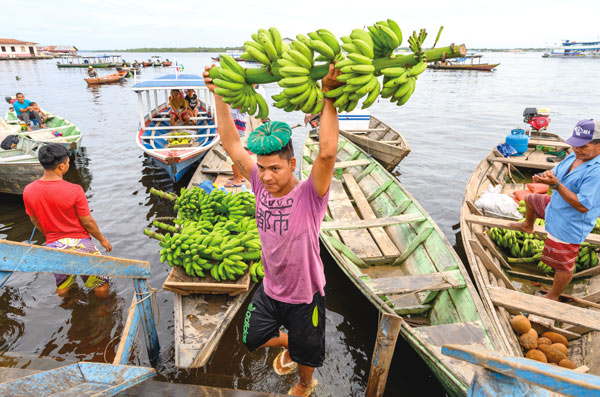 The students spent their first week in Manaus, a city of about 2 million, trying to understand the largest market for Amazon farinha. In the second week, they set out by boat each morning from Tefé, a much smaller city near the Mamirauá Reserve, for communities along the river that make farinha.

The river is the only highway in the Amazon, with tributaries and flooded areas as its side streets. The river rises 30 feet and covers three times as much land in the rainy season as in the dry months of August to November. To adapt, inhabitants build their homes on stilts or directly on floating rafts. Trees survive despite being partially submerged for long periods.

The lush jungle hangs over both banks, interrupted occasionally by a small group of homes, their residents spilling out into small boats or washing clothes along the riverbank. Children in smaller villages bus to school by boat. Tropical flowers and river dolphins conjure a watery paradise, until you swat the bugs and remember the unseen caimans and piranha. 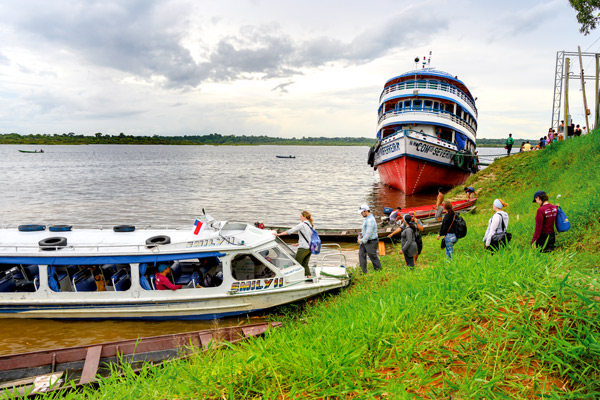 The BOTFL students asked one group of farmers after another about their process for making and selling farinha, attempting to understand everything from the planting to the production to the supply chain. Some communities invited them to pull up manioc roots and feel the heft of a filled basket carried for long distances on their backs. The students jumped in to peel the soaking roots, roll the flour into tiny balls or stir the product with an oar during toasting.

“Before we saw it for ourselves, we thought of mechanizing the peeling process,” said Taruna Thawani (MBA ’19), one team member. “But it’s clearly a social event. We have to be very sensitive to culture when we suggest potential solutions.”

Nearly everyone in the Amazon Basin makes farinha, which is the staple crop and means of survival, comparable to potatoes in Ireland of yore. Each community took great pride in their version of the product, whether it was made in a primitive “flour house” or a newer model aimed at improving sanitation. Their hospitality, from demonstrations to answering questions to offering a juice made from acai berries just cut off the tree, was overwhelming.

Still, conflicting answers were common. John Dunbar, a faculty adviser who spent 25 years in private equity, said his five BOTFL projects have taught him the importance of triangulating information from sources who may not track income and expenses with the same precision or even values as Americans.

Student Stephen Meehan (MBA ’19) put it another way: “It seems like everything we learn raises more questions than answers.”

The final destination helped bring it all together. At Campo Novo, the students toured a packaging facility that FAS helped to organize for an association of 68 communities. The facility takes farinha made in those communities — boated there in jute bags of up to 80 kilograms — and fills 1-kilogram plastic bags printed with their brand, Ribeirinha, to sell in city markets.

At the end of the trip, the students returned to Manaus to present their preliminary suggestions to FAS in an upscale business office. They confirmed that the Ribeirinha brand successfully increased the farmers’ income, but they questioned whether FAS wanted to continue to subsidize the farmers’ prices to the tune of 25 percent — or reinvest in the packaging company.

“The producers are getting the majority of the profit, unlike pirarucu,” Meehan said. “The best way to grow is market share, not cutting out the middlemen.”

With a PowerPoint transition, Business on the Frontlines travels the distance from the rainforest to the boardroom. Bartkus said Notre Dame and FAS are committed to many more years of collaborative projects: “There is so much more good work to be done in the Amazon.”

For more information on Business on the Frontlines, go online to botfl.nd.edu.